Chilly around the…. nose! 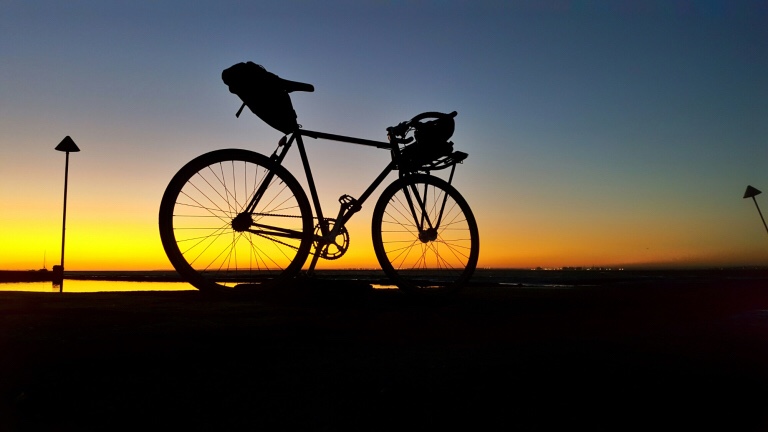 Bikepacking during winter is a completely different ball game to your pleasant, summer, over night jaunts. Packing for winter requires so much more room on the bike. Big down feather sleeping bags, multiple layers on the bike AND for the campsite. This was our dilemma on the first outing for the knightly order of iron bastards. It was an uninitiated crew in the world of cold weather camping except for a couple of us. Tom being one of the experienced  members and having just got back from a freezing camp in North Wales, he was ready. Temperatures were looking like 2/3 celsius for the night but our spirits were high! 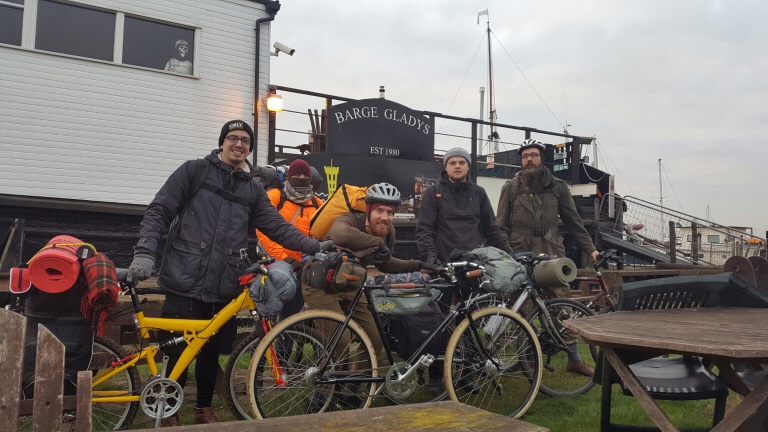 Our meeting place was a barge that had been converted into a pub the ‘Barge Gladys’ as it’s more commonly known. the perfect place to meet and look at our set ups for the trip. Alex Abineri, who shall be known as just Abineri, because there are two Alex’s on this trip, had made a school boy error by wearing a cotton t-shirt for the ride to meet us and needed to swap tops, a sweaty back can ruin your trip in cold conditions. After the obligatory team photo we set off. 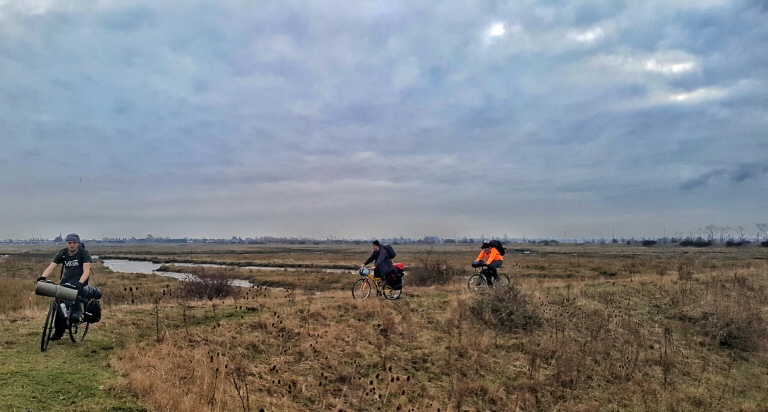 Our previous two man expedition along this route didn’t go as well as this one, mainly because I was using a bike with wider tyres which massively improved my riding capabilities! After a couple of farmers gate bike lifts and the standard dodging of cow mess we had arrived. 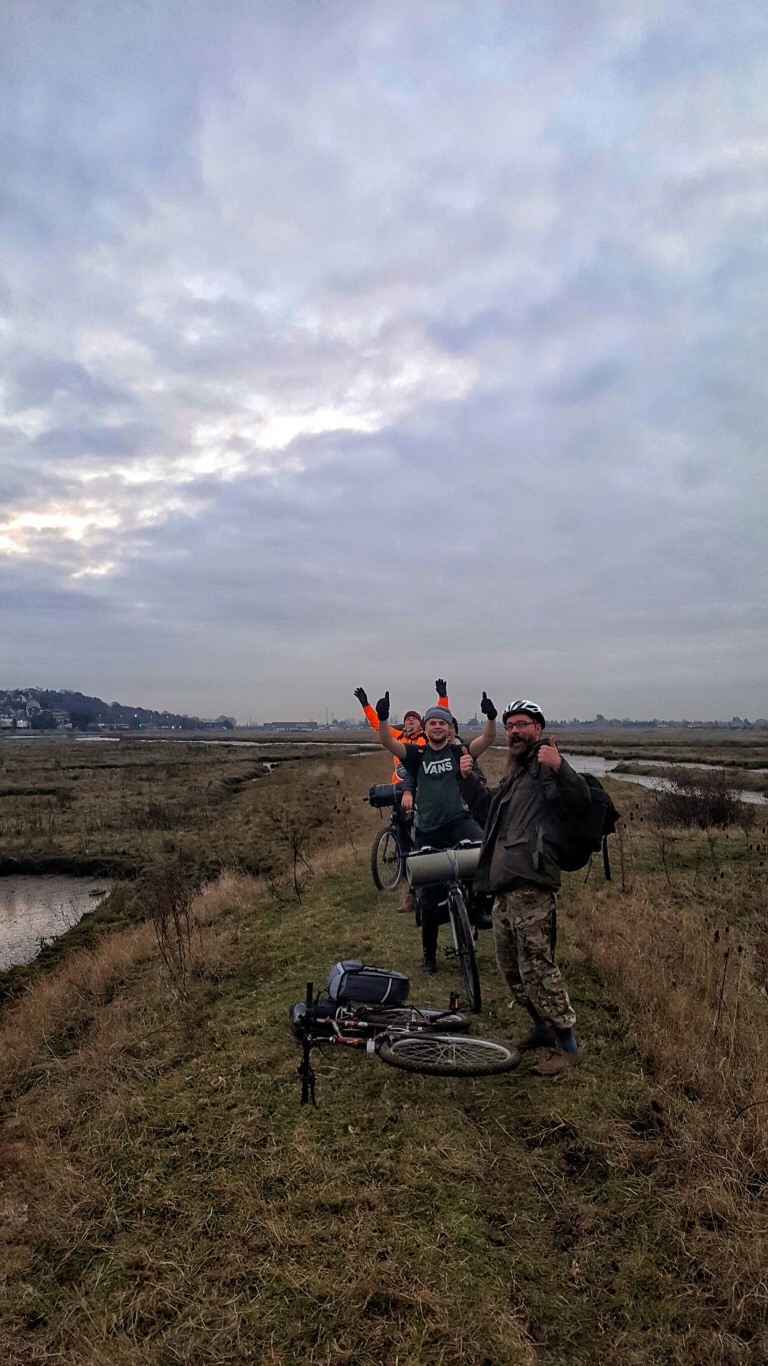 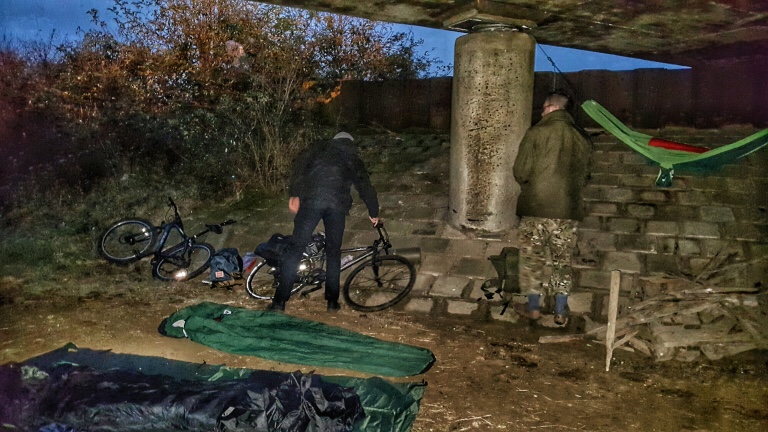 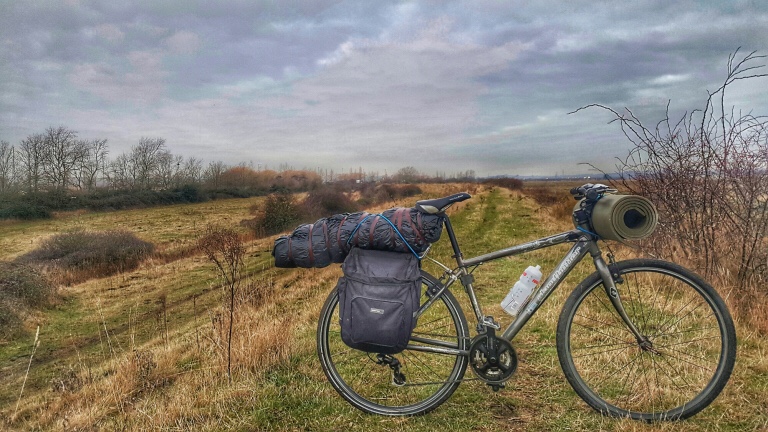 Classic set up for an iron bastard!

The daylight was just starting to fade as we set up camp but we’re are pro’s when it comes to this, sorry not pro’s, just keen to be sleeping outside and being big boys, playing with axes and making fires. Tom and I knew where there was some well placed dry wood to light a small fire to boost our heating situation, these opened planned bedrooms/living rooms don’t store heat too well. Both of the Alex’s and Tom were the fire makers. I played the good house husband and put the kettle on. The mood in the camp was buzzing! we were living the simple life! 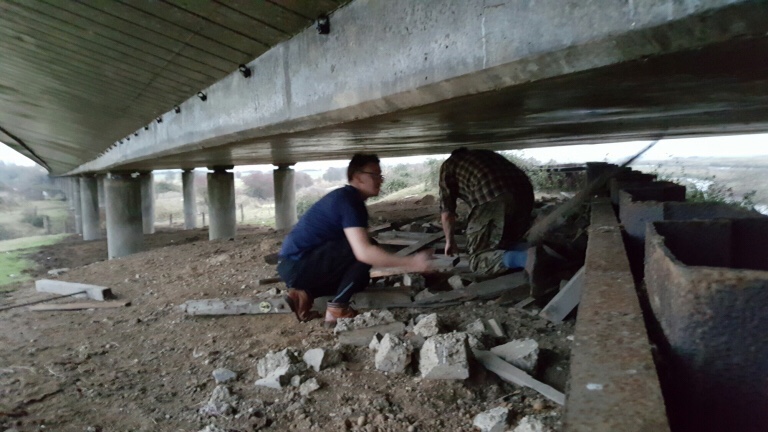 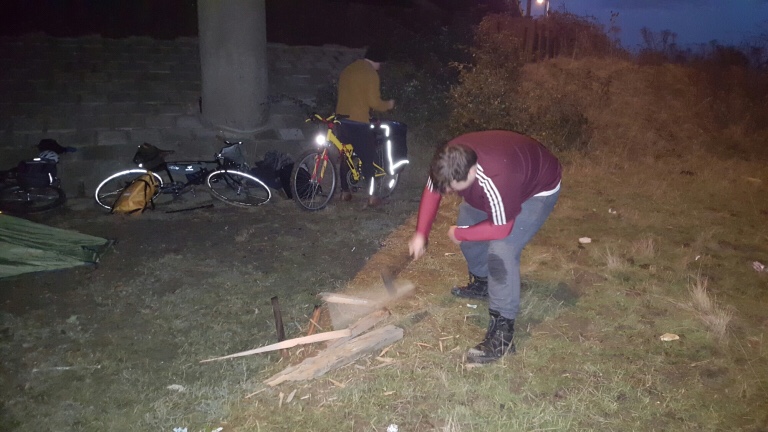 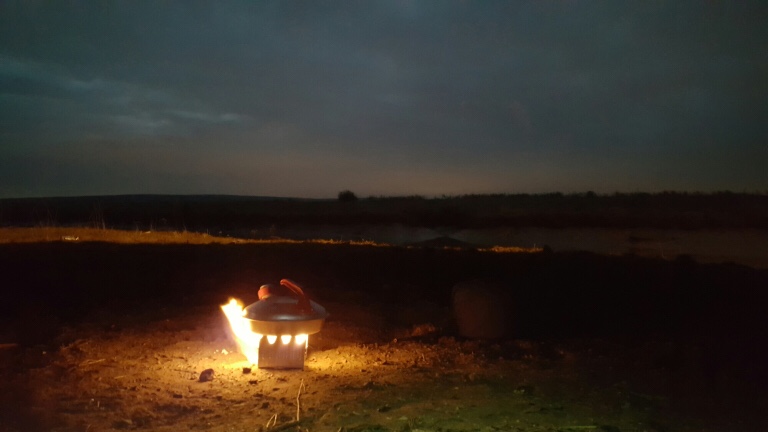 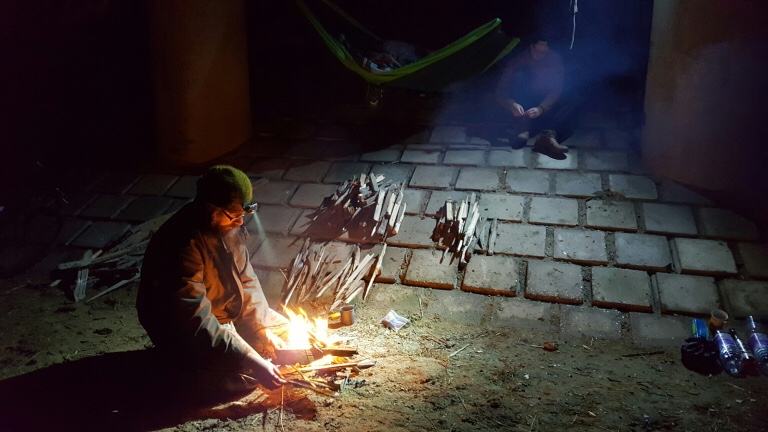 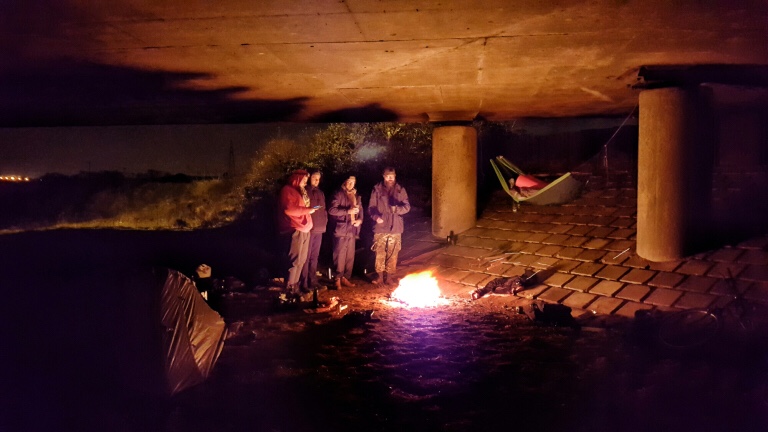 One of our mates, Marcus, unfortunately couldn’t join us due to grown up activities like looking after his wee toddler, but he still met us with a chilli he made for the trip so we had dinner sorted, chilli, cous cous, open fires and whisky, it was a great time to be alive! 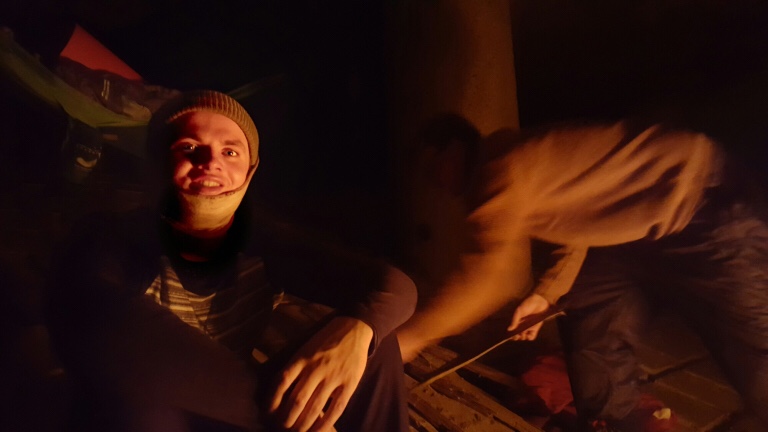 Sam was happy to be doing this 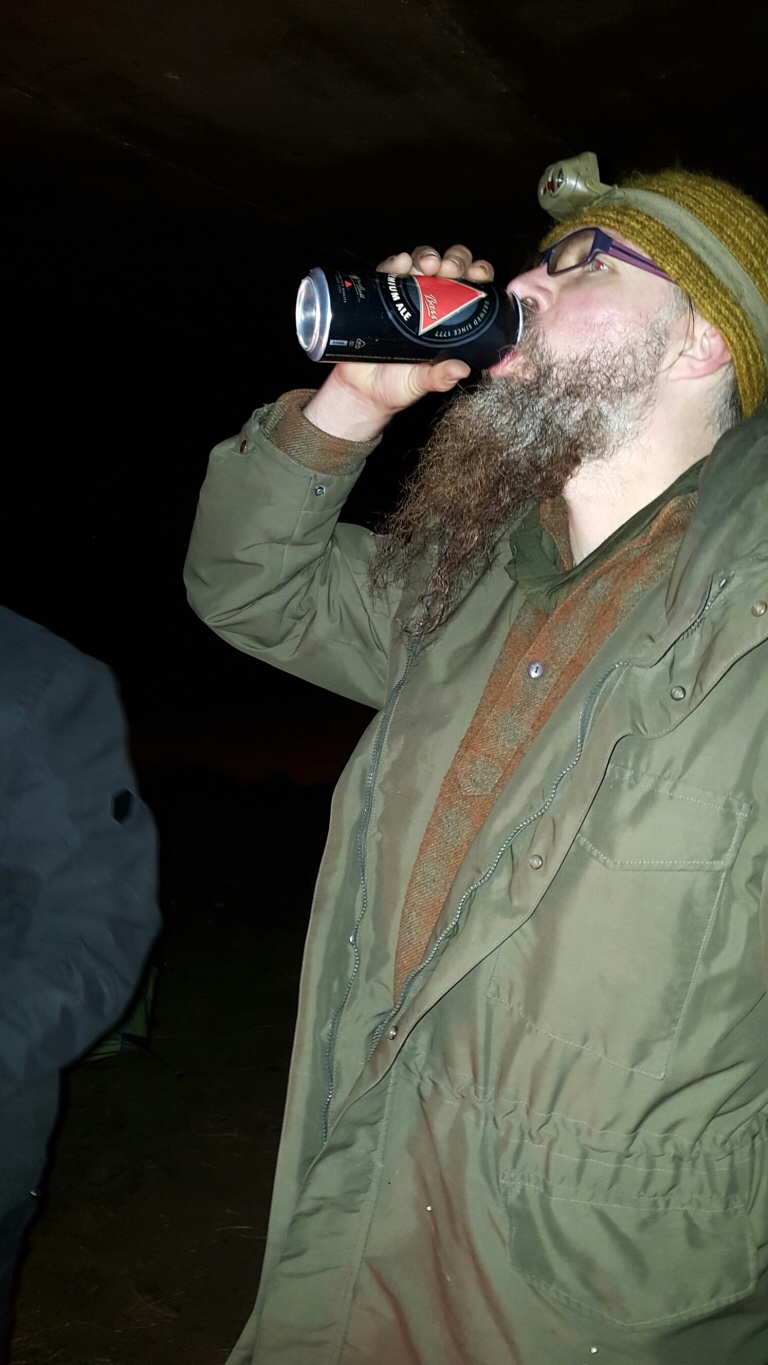 After our great dinner, we tucked into the snacks that everyone had brought along, like doing a show and tell of our carrier bags, let me tell you we lived like kings! We had laughs, we talked about everything men talk about, and living in this modern technology world, we couldn’t help but watch a few funny videos as well. 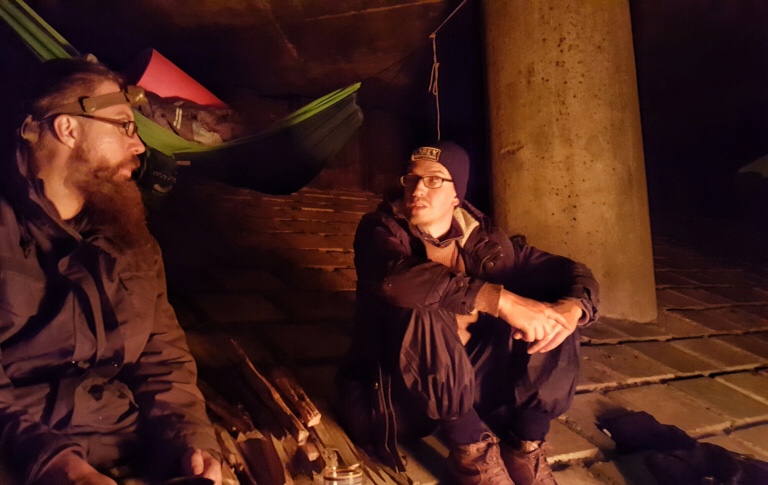 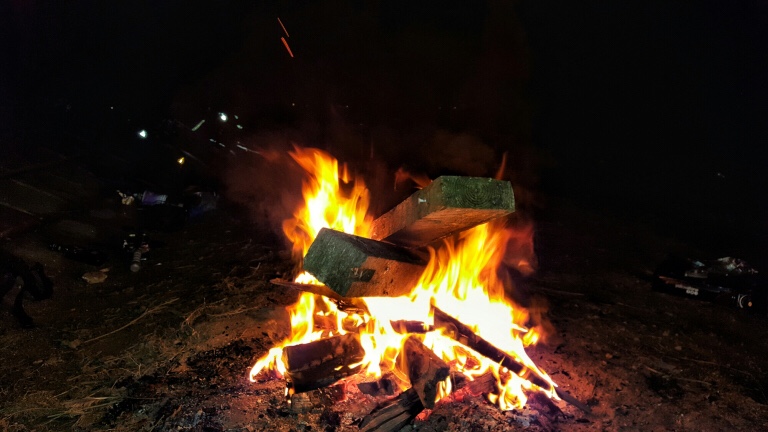 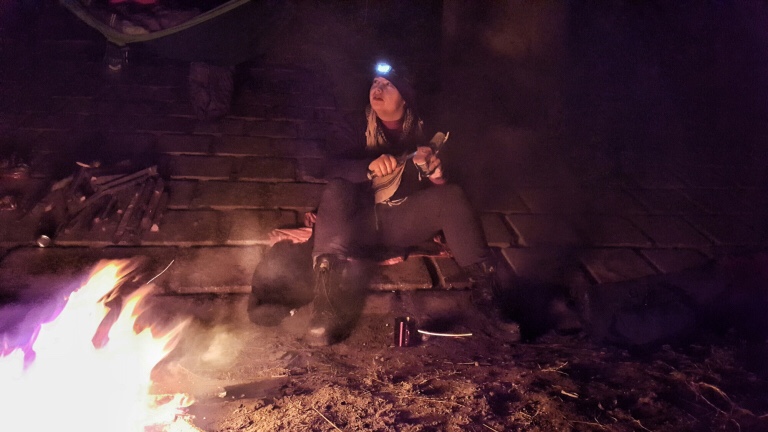 We learnt our lesson on the last trip with alcohol, because carrying loads of beer isn’t great on any bike trip unless it’s a quarter of a mile journey from the shop to your house, so we took spirits. What some of us failed to remember was that spirits are stronger than beer! 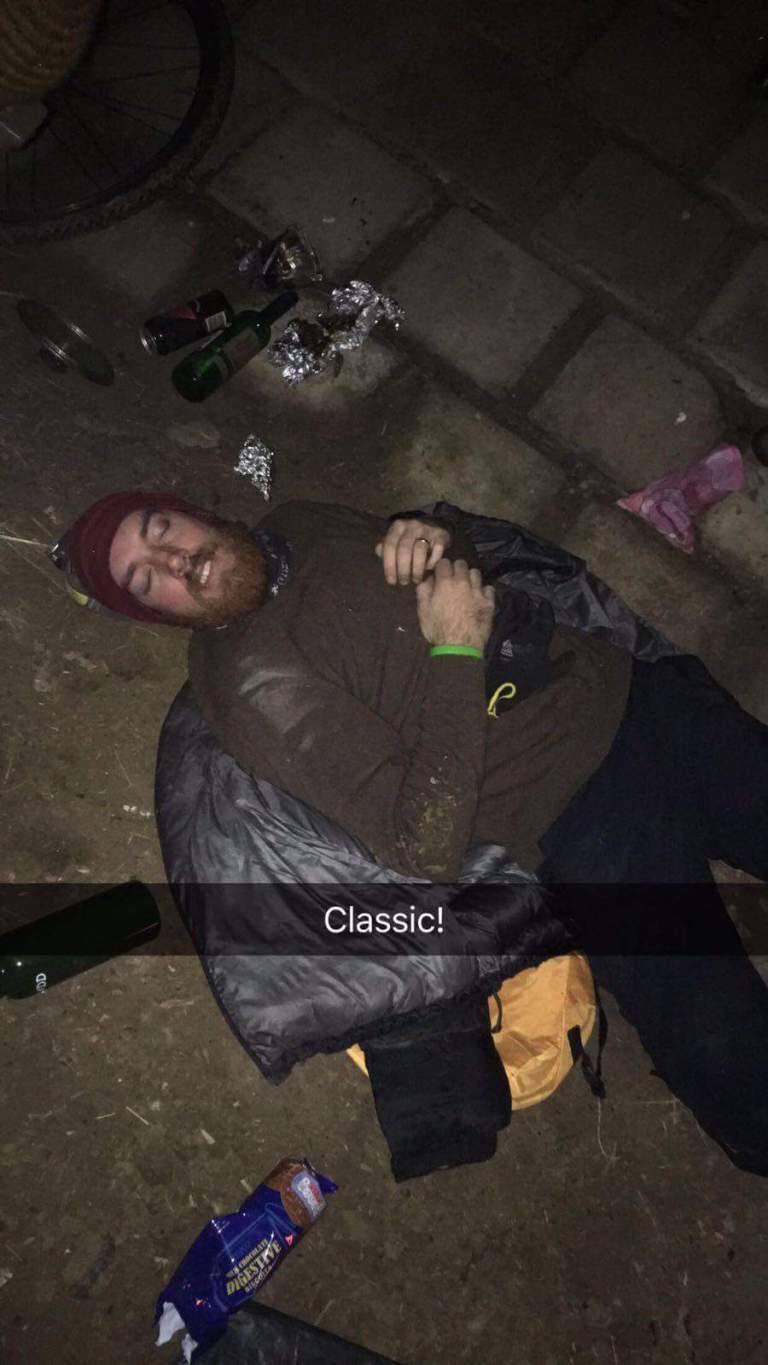 I’m not proud of what had happened but I had a great time. I awoke the next day as a new man! unfortunately that man had been brutally attacked with a baseball bat to the head! I pulled myself together and got out of my sleeping bag, everyone else was fast asleep so I put the kettle on and I decided to tidy up the camp site because when we arrived there was so much rubbish littered everywhere and in the daylight it was shocking to see. After a tidy up, I made my tea and had a wander around, as I pondered life and reminisced about last night I noticed a guy sat in a hammock on the other side of our camp…. now at this point I was really freaking out, was I drunk? all of the crew were in our camp, no one had a spare hammock, who is this guy? I quickly woke the others and told them that there was a stranger on the other side of camp. This guy popped his head over the wall and began walking towards us, it was still dark so I couldn’t see his face until he got closer and then I realised who it was…. Marcus! he had made a solo mission out to us at 4am! what a guy! 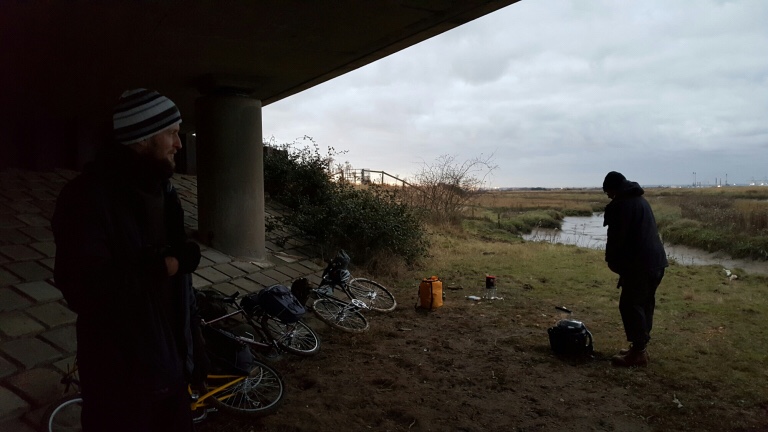 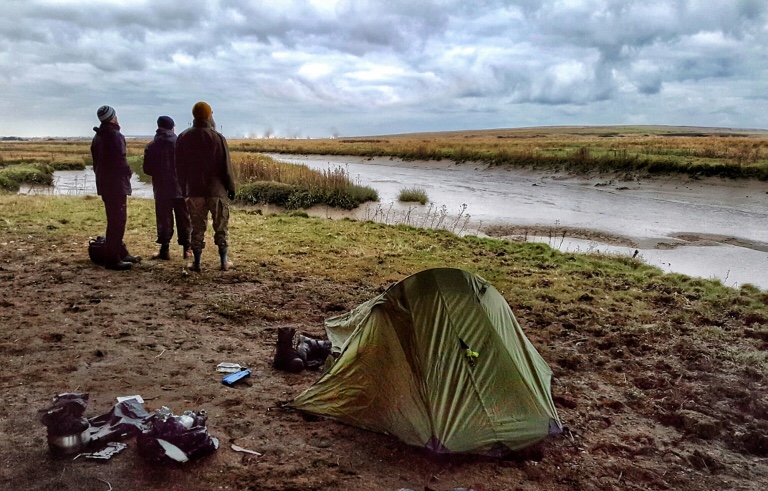 This is where my turn came for grown up activities, I had work this morning so I couldn’t hang around and head to set off, but I was treated to a great sunrise. 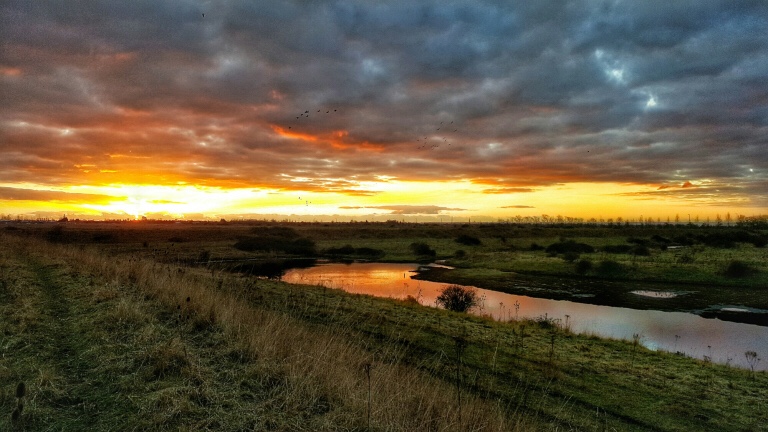 This was the start of many adventures to come!

View all posts by grovescycles